From the Corporate World to the Developing World

In the early 1990s, brothers Joe and Jeff Berninger took a hiatus from their successful, private-sector careers at IBM and Procter & Gamble to travel the world. They were deeply impacted by the beauty, poverty, and people of Guatemala, and Jeff was inspired to volunteer as an English teacher in a rural middle school. But when he arrived, his classroom was bare—and he quickly discovered that the school lacked the most basic educational resources, including textbooks. Teachers spent most of their time dictating or writing on the chalkboard, which caused high numbers of students to become bored and drop out of school. With a background in systems engineering and just enough knowledge of publishing, Jeff decided to do what he could to help the community get textbooks. 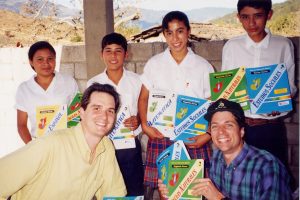 With help from his brother Joe, Jeff got a small grant to set up a textbook rental program at the school where he was teaching. They based their model on the farming cooperatives they had seen growing up in rural Indiana and while traveling in Spain. Parents committed to paying a small monthly fee for their children to rent the textbooks, and school administration learned to save those fees until there was enough money to buy new books. The program was a success—and soon dozens of schools in the surrounding area began to ask for their own Textbook Program. In 1996, Joe and Jeff left their careers to help these additional schools—and Cooperative for Education (CoEd) was born.

Over the past 26 years, the Textbook Program has expanded exponentially, and CoEd has established three additional programs: the Computers Program, the Spark Reading Program, and the Rise Youth Development Program. With the help of an international family of supporters, we have served more than 261,000 Guatemalan students in 12 of Guatemala’s 22 departments. Now, our story is evolving again—with you! We are so excited for you to join the CoEd family and to see what unique contributions you will make to break the cycle of poverty through education.

Ready to Break the Cycle of Poverty?