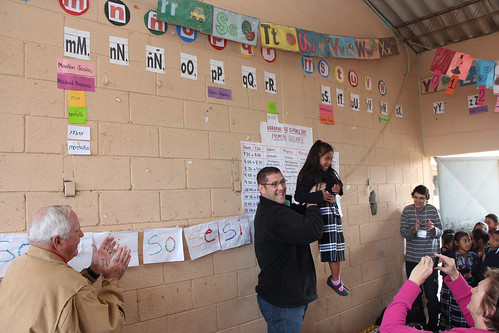 Always first to help and ham it up at the same time, Chris ensured this little girl could reach the wall to put her new vocab word onto the classroom word wall.

One of our favorite aspects of this blog is that we get to introduce you to some really cool things that our supporters initiate to help CoEd. This is one of those stories.

Chris Bailey, a Rotarian from the Cayman Islands, joined us in Guatemala in February for his first tour. Inspired by what he learned, he naturally decided to undertake the extraordinary challenge of running and riding the 640 miles that separate Grand Cayman and Guatemala. Chris has set a goal of raising a whopping $20,000  ($7,000 raised to date!) over six months by completing the following challenges:

Chris recently completed the first task of the  640 Run Ride Read Challenge by biking the Blue Ridge Parkway (no big deal). He gave us the scoop shortly after the ride, and let’s just say that the poor guy did not get off to an easy start! Here’s a brief recap of the obstacles he had to overcome:

Shortly after the 236 mile mark, Chris’ bike broke beyond repair, forcing him to use a spare bike much too small for him. To make things more interesting, Chris contracted a chest infection in addition to the neck and knee pain he incurred from riding the smaller bike. He says, “If it hadn’t been for the charity, it would have been game over!”

We will let Chris recap the end of this harrowing journey in his own words:

“The final day was 75 miles and the three highest peak of the Blue Ridge. I was crying at breakfast as I felt so bad with my cold/chest, and I couldn’t bear to put my bum on the saddle or even think of cycling uphill! Then one of the guys changed my saddle for a Brooks saddle that would put pressure in different places. Well I can only say that saddle was the comfiest thing I have ever sat on; pure joy! It lifted my spirits and the same chap (Piers Dryden of Ogier) rode the first 30 miles with me at my snail’s pace and got me over the first two peaks. I pulled myself up the last 10 mile climb with an average gradient of 10%. Then I settled in for 20 miles of downhill!! I hit 54mph, passed the finish line and collapsed.” 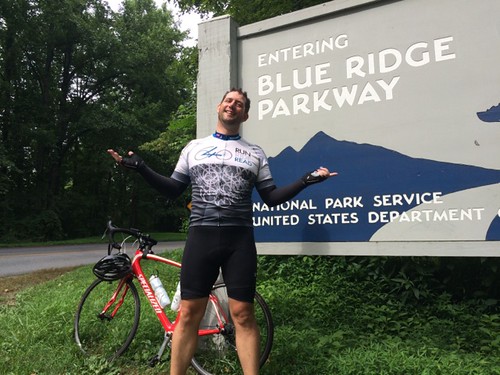 What an epic adventure! Thank you, Chris, for undergoing what sounds like a couple hundred miles of suffering all in the name of literacy. You’re a good guy, Chris Bailey (also completely crazy, but in a good way), and we’re lucky to have you biking (and running and swimming) on our behalf.