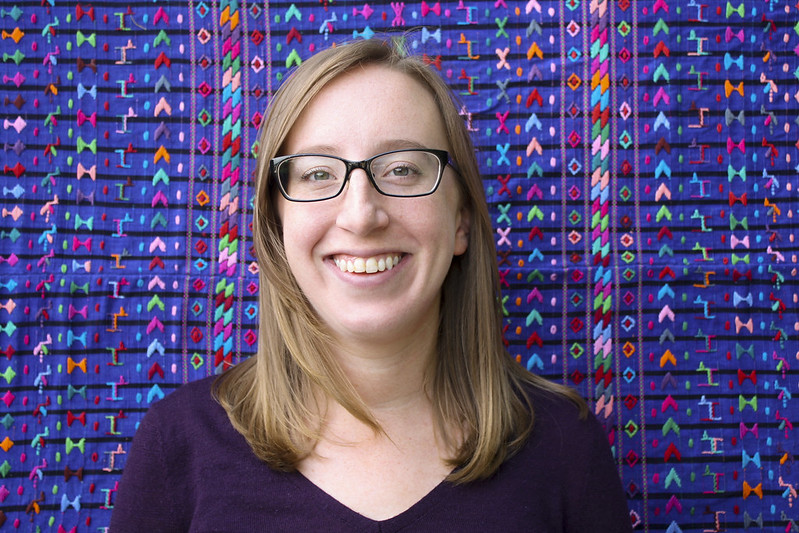 Now presenting the newest member of the CoEd team: Abby Gaide! Abby joined the team just a few short weeks ago as the Senior Rise Program Coordinator in the United States. She can’t wait to get to know you and help you connect with the students whose lives you are changing! Read on to learn a little more about her.

What inspired you to come work for CoEd?

The more I read and heard about CoEd, the more it just felt like something I had to be a part of (which I imagine is how a lot of our supporters feel as well). The Rise Youth Development Program especially stuck out to me. I have experience working as a partner with schools, and I recognize that children are struggling with a whole lot more than academics when they show up to school. I know how important it is to provide services and resources to address those needs. Everything CoEd does is meaningful; it has intention and a long-term goal. That goal—to break the cycle of poverty in Guatemala through education—is big, but I’m excited to work towards it with a bunch of other determined and compassionate people—staff, donors, and families/students.

How would you describe the role you are stepping into at CoEd and what are you most excited for?

I am the new Senior Rise Program Coordinator in the United States. This role has a lot of parts, but it all ties back to the same goal—to help facilitate meaningful connections between CoEd supporters and those we serve in Guatemala, particularly through the Rise Youth Development Program. My job is to help keep people connected with the students they sponsor, get even more people to join in this work, and keep saying thank you over and over again for all of the wonderful things supporters are accomplishing. I’m excited to meet our current supporters and hear more about their stories. And I’m excited to spread the message of CoEd, so we can make sure that even more students have the support they need to break the cycle of poverty.

You have a Master’s Degree in History from the University of Cincinnati. What did your thesis work focus on and why did you choose your topic?

My thesis was titled, “Courage and Chastity: A Cultural Analysis of Female Soldiers of the American Revolution.” There’s been a lot of work done around bringing stories of female soldiers to light (Deborah Sampson, Margaret Corbin, Mary Hays McCauley, etc.), but I looked at how these women’s stories were told, because the response to them is often as historically important as the women themselves. It reveals a lot about definitions of femininity and American identity in the late eighteenth to mid-nineteenth century, as well as the effort to establish purpose and meaning behind the war. I stumbled upon the story of Deborah Sampson when I was in undergrad, and it was just so fascinating. I wasn’t planning on focusing on her when I went into my Master’s program, but I just couldn’t get her out of my mind.

What was one of the most interesting things that you learned while completing your thesis?

There’s really so much interesting stuff (feel free to pick my brain about it anytime)! Deborah Sampson is the most well-known female soldier of the American Revolution, largely because she capitalized on her story. In 1797, she published a memoir about her time in the army called The Female Review (though there is some question about how much she actually dictated and how much was embellished by author Herman Mann). The first edition completely sold out. Also, Deborah Sampson not only received a pension for her service in the army (despite the fact that what she did was illegal), but her husband also successfully petitioned for a pension as a veteran’s widower! The report on this repeatedly mentions that it is a singular case, never before encountered in the history of the United States. Fascinating.

What do you like to do in your spare time?

I like to read, write, and watch plenty of Netflix, but I also really love getting outside, whether it’s hiking or kayaking and playing sports (soccer is my favorite).

What is one random thing you get really excited about?

This may come as no surprise, given my history background, but I go full-on fangirl when it comes to Hamilton (the musical, though Alexander alone is pretty interesting). I know all the words, have read all the books, seen all the backstage YouTube videos, etc. I finally got to see the show in Cleveland this summer and it was amazing!

Want to say hi? Drop Abby a comment below!