An Entrepreneur in the Making 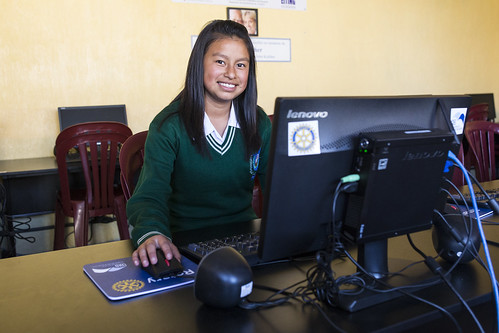 Jennifer is taking full advantage of the CoEd Computer Center at her school in preparation to live her dream of owning her own business.

Like many other kids her age, Jennifer, an eighth-grader at El Aguacate middle school, doesn’t know exactly what she wants to do when she grows up. “I want to own a business” she says, knowing that she wants to lead and employ others, use her creativity, and build a Guatemala that she can be proud of. She just hasn’t quite pinned down her field of interest yet.

But what she does know is that she’ll need to use a computer—a computer like the one you have at home or at work right now. Our devices have become such ubiquitous parts of our lives that we often fail to remember that they’re even there in the first place (that is, when they aren’t missing, updating, or malfunctioning).

Such is not the case for Jennifer and her classmates at El Aguacate, however. “My uncle has one,” she tells us, recounting when she first learned how to use a computer and first glimpsed the exception to the technological scarcity that is the norm in her small town. She doesn’t have a computer at home. And there isn’t a public computer lab in town where she can go to use this basic, 21st-century tool. Instead, a computer was her uncle’s cool toy, one of those rarities that the people you know sometimes have but you don’t own yourself.

Everything is different now, and Jennifer’s quite excited about it. Thanks to Cooperative for Education’s Computer Centers Program and supporters like you, Jennifer and her classmates now have access to computer workstations, located right inside their school building. They can build the skills they need to become members of the professional class, wherein computer literacy is assumed and necessary. No longer is a computer a fun toy, a hobby the privileged few can tinker with on the side.

Computers have become for Jennifer a conduit of knowledge, a vehicle through which she can come to know the world. “We want to keep learning,” she says, “and computers help us inform ourselves about what’s going on out there.” As cliché as it is, it’s not any less true: she now has the world at her fingertips.

While some of us may have become accustomed to this reality, its value for Jennifer and the thousands of students benefitting from the Computer Centers Program is very tangible. So much so, in fact, that she started working so she could pay her own monthly fees into the program’s revolving fund.

Jennifer’s father left school after finishing sixth grade and now works as a contractor, making barely enough to cover her family’s basic necessities. “It’s difficult,” she says of paying her fees, “but I help my mom to make tostadas.” This is how Jennifer’s family makes the extra money necessary to give her access to computer learning—something worth waking up early in the morning to take on additional work.

Computers have provided the occasion to not only build concrete skills, but also to continue to develop the entrepreneurial spirit that will serve Jennifer long into the future. Getting up at 5:30 to make tostadas… that seems a fitting beginning to what may turn out to be a business story known the world over. Who knows? Maybe in 20 years’ time, it’ll be Jennifer and her success that students are learning about in the El Aguacate lab.