Luisa isn’t supposed to be in school.

She had been accepted into the Scholarship & Youth Development Program and matched with a sponsor, but shortly before the school year started last January, her sister called to tell us that Luisa, who is only 13 years old, was working in Guatemala City as a maid, and would no longer be able to receive the scholarship.

After hearing the news, the scholarship team scrambled to find a solution, so that Luisa, who was orphaned at the age of eight, could come back home to live with her sister in Patzún and continue her education.

We are happy to report that Luisa is no longer working as a maid in Guatemala City, but is instead in school and pursuing her dream of becoming a teacher someday; a feat that would not have been possible without her generous sponsor, Lawrence Edwards.

Lawrence says, “Among so many worthy and willing scholarship candidates, Luisa’s story is an especially unfair and heartrending one. Consequently, we are all the more thankful for CoEd going the extra mile for her, and all the more joyful that Luisa is now in and embracing the program. Seeing her again earlier this year is difficult to put into words and we are all thrilled that she is now on the road to pursue her dream of becoming a teacher!” 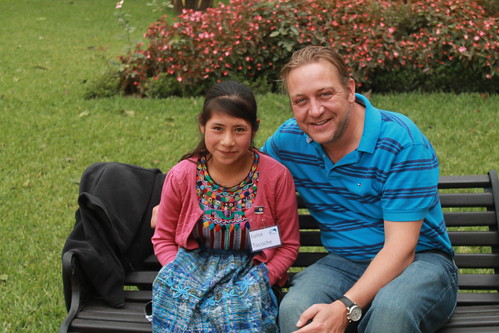 Lawrence and Luisa met for the second time during his last trip to Guatemala in February 2015.

Lawrence feels strongly about educating girls in developing countries and has gone the extra mile himself, generously donating money to help fund the expansion of CoEd’s Scholarship & Youth Development Program, which will greatly expand in the next three years. And the majority of those kids? Girls just like Luisa, who would be working in any number of low paying jobs instead of doing the one thing that could truly break them out of poverty: going to school.

Lawrence says, “Why do we support the scholarship program? Put simply, sponsoring a single child changes multiple lives; not just the life of the child, but the lives of their family and the lives of the following generations. The impact of a single sponsorship is truly everlasting.”

A million thanks to Lawrence, and to ALL of our scholarship sponsors. YOU are changing lives in Guatemala, one student at a time.

Want to learn more about other students who need your help?