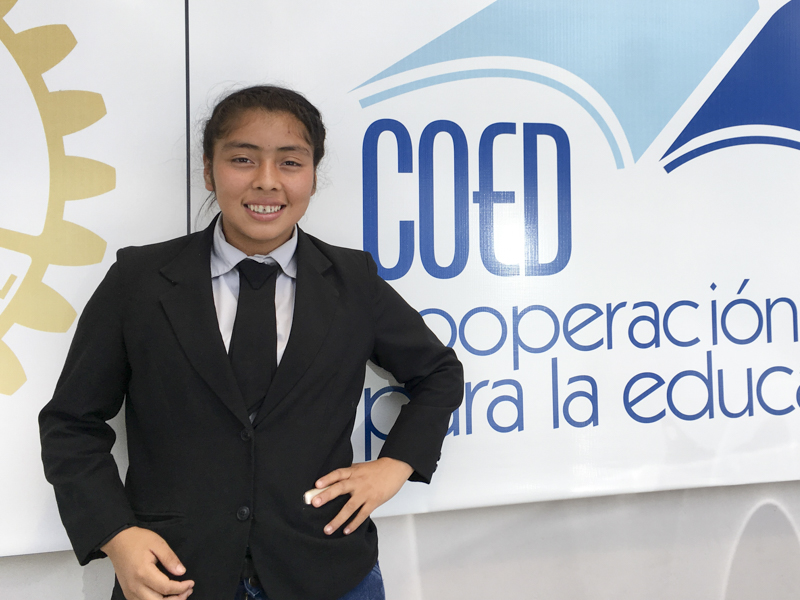 As drug trafficking continues to plague Central America and the United States, one girl is determined to do her part to keep her community safe. Today we want to share with you the incredible story of Glendy, a Rise Program scholar who will inspire you and give you hope for the future.

Listen to Katie (CoEd’s Director of International Programs) recount her meeting with Glendy, or scroll down to read the transcript of Katie’s recounting!

You can sponsor this amazing girl (or one of her peers).

Click below and we’ll match you with Glendy or (if you’re a little slow on the draw!) an incredible student like her. Hurry and click below!

Hi everybody! This is Katie from Cooperative for Education. I just wanted to share a story from September, when I was visiting Guatemala, of one of the Rise students. As you remember, the Rise Program provides students the financial resources to continue their education in middle school and high school while also providing a lot of youth development opportunities, including workshops and field trips and service projects, to engage the students and help them develop more of the soft skills that will help them throughout their lives.

So I happened to be in Guatemala during this amazing workshop that they do on preparing the students for the job market—learning about how to write resumes, and take tests (that are required) in the process, and do interviews, and all of that. We have students come in from several different communities for that workshop, and so some of the ones who were there from far away had lunch after the workshop. So I got to sit and eat with them, and it was nice because it was a couple of communities that had just entered the program this year, so I hadn’t really gotten to meet those students yet. But I think they might have felt a little bit awkward having me there and not knowing who I was or how to deal with me, so it was kind of awkward and silent at the beginning of lunch when everyone sat down.

But then this girl who was sitting right next to me kind of turned to me and said, “So where’d the gringo go?” Laughing. And it turns out she was referring to Joe, our Executive Director, who had been there for the first part of the event, but had to leave to catch a flight partway through. And I said, “Oh, he had to go catch his flight. But I’m a gringa!” Like, “Don’t worry, I’m still here!” Laughing. And she was like, “Oh, really? Why…why don’t you talk like them? Why don’t you talk like him?” (She was) referring to Joe’s Spanish accent, which—he’s an amazing Spanish speaker, but he’s had trouble getting rid of that gringo accent. So that was funny! And she was just so sassy: while all of the other students were kind of feeling timid and not wanting to speak up, she had no hesitation whatsoever. I just thought she was a riot.

But then later on as we were having lunch people kind of had more individual conversations with people around them, and I started chatting with Glendy because she was sitting right next to me. And I just kind of asked her more—I don’t even know what I asked her—but it turned out that she is the youngest of six girls in her family and she lost her mom three years ago. Her mom was murdered…brutally. She was shot in the face and burned. And she’d been missing for a week. She disappeared and was missing for a week, and then they found her body thrown over a cliff after a week, and in that condition.

So Glendy had a really hard time dealing with that. She had heart problems as a result of it and was in the hospital for a month following that. She had to miss her mom’s funeral because she was in the hospital, and she had to miss the beginning of the school year that year because she was still in the hospital. And she, being the youngest of her siblings, she was the only one that was still at home, so she was living alone with her parents and her mom kind of had her spoiled and always took care of her. So she told me: “I never had to cook at all. When my mom died, I didn’t even know how to cook an egg, and now I’m the one that’s supposed to take care of my dad and cook for him.”

But she was amazing, too, talking about how much she appreciates her dad. And it was kind of really inspiring to see how their relationship has gotten so close since her mom’s death, too. Because he works in the fields as a farmer, but far away—like an hour and a half or two hours away from where they live. And so before Glendy’s mom died, he would travel there for work and then just stay during the week and come home for the weekends, since it was such a long commute. But then, the other that Glendy told me was that after her mom’s death, they were investigating the murder and she and her family got threats from people who were involved in the murder, so her dad did not feel comfortable leaving Glendy home alone while he was gone all week. So he started coming back every night—making those three or four hours round trip every day so that he could be there to support Glendy. And she said he’s been an amazing emotional support. She called him an angel, and a great father, and it was really nice to hear that.

And she told me about how one of her sisters dropped out of school after their mom’s death because she just couldn’t…couldn’t get through it. But Glendy was determined to continue even though she missed the beginning of her school year in her eighth grade year because she was in the hospital. So it was a hard transition back, but she kept with it. And she actually wasn’t able to continue on to diversificado (high school) once she finished básico (middle school), so she was actually out of school when we identified her in the student selection process to get a scholarship.

So now, thanks to the scholarship and the Rise Program she has been able to get back into school and she’s now studying in a two-year high school degree in computers. And then she wants to keep breaking down gender stereotypes and study to be a mechanic and a police officer. And she told me she wants to be a great police officer to help keep communities safe from things like what happened to her mom. And she’s specifically interested in working to stop drug trafficking in Guatemala.

So I was just blown away by Glendy and her story and just the fact that when she was telling me all of this—her story—you know, I never would have expected that background from this like, sassy girl, who was, so outgoing and fearless at the beginning of the lunch. And then it just hit me too: I’ve had this experience a lot of times. Pretty much every time I’m in Guatemala and I go to one of these activities with the Rise Program I feel like: Oh my gosh, how did I happen to be sitting next to this person who has such an amazing, heart-wrenching story and is so resilient and has managed to get through so much? And then I realized: Well, that’s just because they’re all like that. So no matter which student I’m sitting next to, I’m going to hear an amazing story and be really inspired by them and their perseverance.

Thanks for listening and thanks for all you do to support Cooperative for Education and students like Glendy. Bye bye!

You can sponsor this amazing girl (or one of her peers).

Click below and we’ll match you with Glendy or (if you’re a little slow on the draw!) an incredible student like her. Hurry and click below!