It’s Out of Our Hands

What sets CoEd apart from other charities? Can you name something? Let me count the ways…

Seriously, though, one of the things we pride ourselves on is community engagement. We don’t just arrive at a school, hand over some books or install some computers, and leave. Instead, our team works to develop relationships with the school community (from principals and teachers to students and parents) and to train school teachers and administrators to manage the programs on their own. This way, the beneficiaries of our programs really become the agents of their own success. They are in control, and they are the ones who ultimately pull themselves out of poverty. All we really do is give them the tools to do so, in a country where those tools often aren’t available.

Given our charitable philosophy, we tend to get really excited when we hear stories about our beneficiaries taking the programs into their own hands. And that’s exactly what principal Omar Barrios at Justo Rufino Barrios Olintepeque middle school in Quetzaltenango has done with the Computer Centers Program at his school. 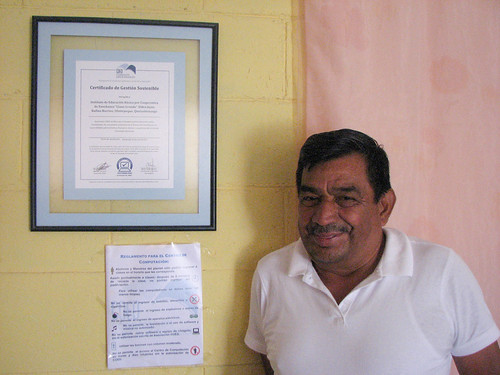 Omar next to the sustainability certificate in Olintepeque’s computer lab

Omar’s school entered the Computer Program in 2010 and “graduated” from CoEd boot camp in 2012. Since then we’ve been available for support, but Omar and his staff haven’t needed it! In fact, they’ve taken their Computer Program to the next level by forging a partnership with INTECAP, a government-funded organization that offers professional and technical training in order to prepare workers and “contribute to the competitiveness and development of the country.” That sounds pretty awesome to us! Go Guate!

In addition, Olintepeque’s Computer Center continues to be in immaculate condition, and the school community has contributed to their revolving fund at an excellent rate. Last year Omar was wheeling and dealing with local vendors to renew his school’s computer equipment—at the best price for the best technology.

Omar is so pleased with the benefits he sees from the Computer Center at his school. When we met up with him on tour in February, he explained that before the Computer Program came to Olintepeque, the teacher taught computer class using cardboard cutouts, and was only able to explain to students the different parts of the equipment. Now Omar’s students follow a curriculum based on the IC3 GS4 Digital Literacy Certification—which is internationally respected—and become adept at everything from the Office Suite to basic programming. Many graduates of Olintepeque are going on to study computer-related fields in high school, and some are even working in banks, a major achievement. 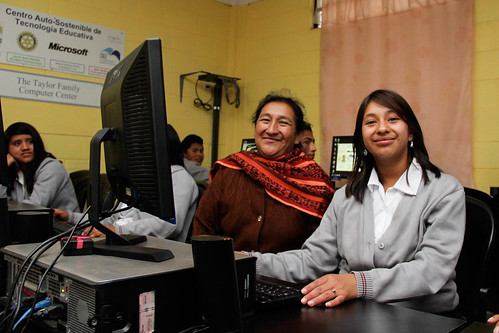 We couldn’t be more excited for Omar and the community of Olintepeque. It’s out of our hands now (although we’re of course still available for support) and that’s exactly how we want it!

Interested in supporting the Computer Centers Program? Check out the options available on our sponsorships page.