Abner Daniel Aguilar: A Determined Eye to the Future

Like many young people in Guatemala, Abner Daniel Aguilar has beaten the odds simply by being in school at all. Abner left home at the age of eight in order to escape abuse at the hands of his stepfather. For seven years, he lived with other families in the community, working for a meager $0.65 per day planting in the potato fields or cleaning houses. With little time for school, Abner quickly fell behind and was forced to drop out. 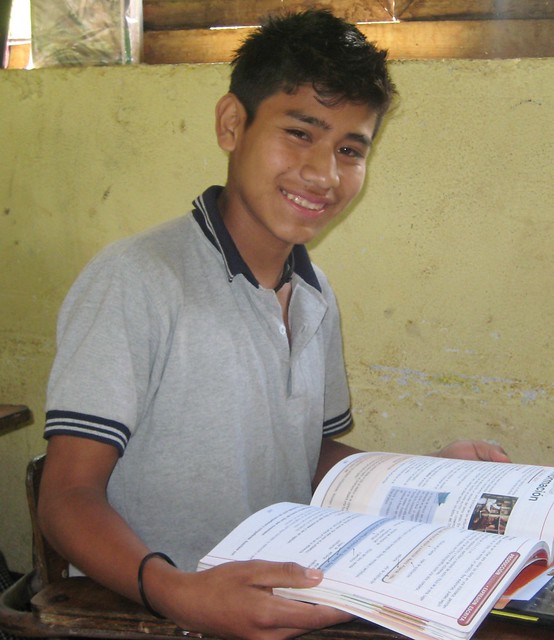 Abner Daniel Aguilar takes advantage of having CoEd textbooks at his school, even using them outside of class to learn poetry. La Parroquia Cooperative School, Quiché.

At age 16, Abner appears reserved and thoughtful at first glance, but he also possesses a steely resolve. Abner returned to school in 2010, and is using the textbooks provided by CoEd to help him achieve his dreams. He has taken charge of his own future and set his sights on becoming a songwriter and musician. Abner is charting a path that will lead to his success, defined as the ability to one day take care of his mother.

With so much time lost, the textbooks have been crucial to Abner’s ability to keep up in school. He uses them at every opportunity in order to take his education a step further. Abner eagerly recounts the day he discovered a section of the Spanish language textbook not covered in class—the section on poetry. Outside of class, Abner devoured every word about how to count syllables and use rhyming and rhythm to transform simple language into a poetic stanza.

Abner immediately channeled his newfound knowledge of poetry into his passion for music, using the lesson in the textbook to improve his lyrical ability. His songs focus on spreading the message that children in poverty, like himself, cannot succeed without love. As for the future success of his own musical career, Abner says with confidence, “Él que quiere, puede”—“Where there’s a will, there’s a way.”

Did your favorite subject in school lead to your career?