Fernando Augusto Gonzalez: Learning to read, reaching for the stars. 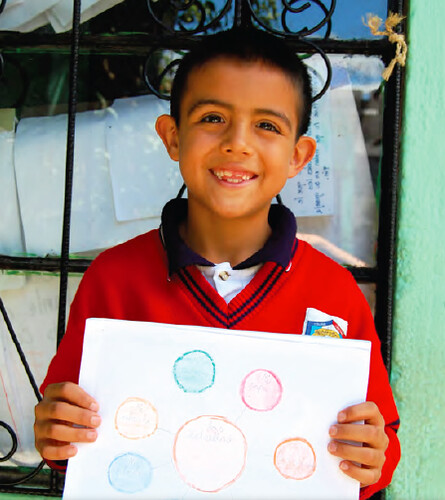 Fernando Gonzalez proudly displays an illustration from a book he wrote about his family.

Fernando Augusto Gonzalez thinks about his parents all of the time. He wonders where they are; he imagines what they might be doing in that particular moment. Maybe, just maybe, they’re thinking about him, too.

Fernando lives with his grandparents in the impoverished, rural community of Santiago Sacatepéquez, Guatemala. His parents migrated to the United States when he was a baby, in search of jobs that could support their growing family. Indigenous and illiterate, Fernando’s parents had few prospects at home, where more than half of the region’s residents live in chronic poverty and compete for limited resources.

Fernando’s grandparents put a roof over his head and give him plenty to eat. They even saved up their meager earnings for several months to buy him a uniform – without which he would not be able to attend school. Fernando knows they love him. But it’s not the same. He prays every night to be reunited with his mother and father. He wants to be a family again.

From time to time, Fernando’s parents send small amounts of money home. But the opportunities they hoped to find in the U.S. have been scarce and unpredictable. Fernando says his parents encourage him to stay in school and learn to read, so that he can have a better life. Like all parents, they want more for their children.

The Culture of Reading Program at Fernando’s school gives him, and his family, hope for a brighter future. Since entering the program, Fernando has blossomed. Once a shy and indifferent student, he now shows up early for school so that he can spend quiet time perusing the books CoEd provides his class. He has become an enthusiastic reader and learner, and often volunteers to act out the stories in front of the other second graders. His teacher jokes that Fernando will soon take over her job. 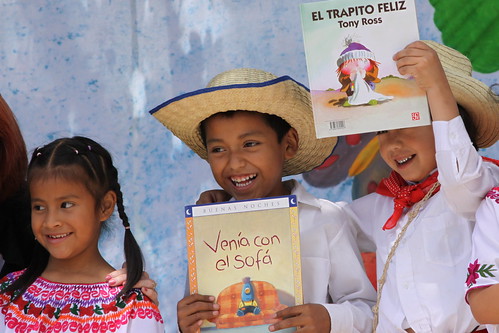 Fernando has bigger fish to fry. He wants to get a job in the capital, earn a lot of money, and help his parents to move back home. Fernando is confident in his abilities to succeed. All he needs are the right tools.

Before CORP came to his community, Fernando risked becoming another statistic: one more drop-out, one more illiterate child, one more indigenous Guatemalan relegated to the cycle of poverty. All that has changed.

Besides improving his reading skills, CORP has also helped Fernando develop his talents as an author. “I like to write about the stars and how I see my family in them,” Fernando states wistfully. “I know that, no matter where we are or how far apart we live, we can look up at the sky and see the same thing.”

For Fernando’s family, teachers and classmates, he is the star—burning bright with potential and promise for a better life, beyond the limited circumstances into which he was born.

See Fernando featured in one of our videos on YouTube.