Have you ever wondered how the very first CoEd Computer Centers received their computers? Wait, what am I saying? Of course you have!

Well, my friends, we used to collect donated computers and ship them to Guatemala ourselves (with some much appreciated help from partner organizations). Although these early shipments were successful and helped launch our first Computer Centers, we’ve since taken a slightly less back-breaking approach, and now purchase computers in Guatemala. This:

A) Helps the local economy.

B) Ensures that all the computers are brand new and uniform, making maintenance and networking more efficient.

C) Frees up our time for awesome arts and crafts projects! 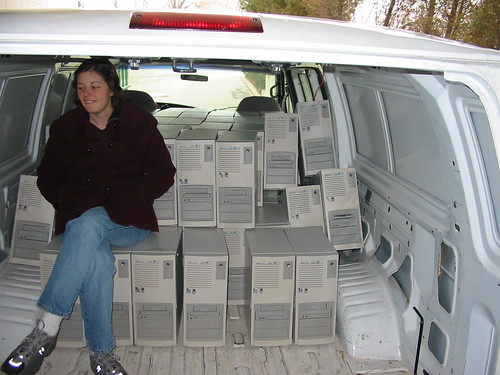 It was on this day that Jessica figured out an even better use for the computers – sitting on them.

Check out this email from co-founder Joe Berninger about one of CoEd’s earliest experiences with shipping computers down to Guate:

Fidelity gave us 100 computers instead of 50! As you probably know, Tuesday was our big packing day for the Fidelity computers. Colleen did a fantastic job coordinating all the players. This whole process was sooooo much easier than sending our own container that I’m convinced that this is the “way to go” for all future shipments. 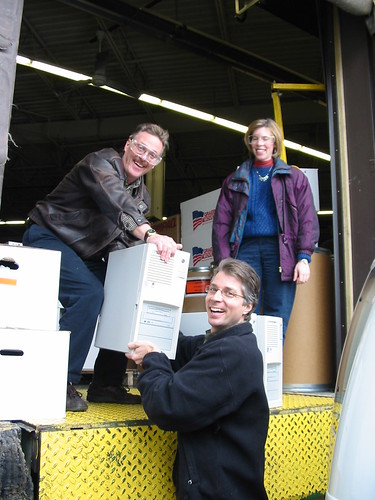 Joe and the CoEd Team in 2003 packing up the donated computers for shipment to Guatemala!

Anyway, Jess, Anne and I rented a 15 ft. van from Budget to haul the machines. When we arrived at Fidelity, to our surprise they offered us 100 computers (instead of the 50 promised)! I said YES, we’ll take ’em. We packed the van to the gills and rode the 5 miles to Michelman with Jess riding on Anne’s lap in the front. We had it loaded so heavily that it was almost riding on the frame. 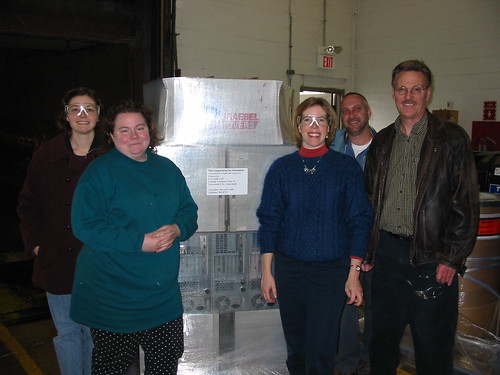 Safety goggles and shrink wrap for all!

We showed up at Michelman and quickly negotiated with them to handle double the number of computers than we had originally thought. They had no problem at all. We packed them onto three neat pallets and sent them to the shrink wrap machine, which wrapped them so tightly and thickly that nothing will move a millimeter! They loaded them onto the truck as we watched and they will be delivered to Common Hope by the end of the week.

Common Hope, then, expects to put them on either their January or February shipment. They say that they are getting customs clearance in less than a month, so the machines should become available to CoEd around early March.

We’ve made some major strides in efficiency by purchasing computers in Guatemala, but Joe’s email is an interesting peek into what life used to be like here at CoEd.