The Moment of Inspiration

Have you ever wondered what it’s like to start your own nonprofit organization and grow it successfully for 20 years? In celebration of our 20th anniversary, one of our newest staff members sat down to interview the brothers who started it all. Stay tuned through this blog series to learn what kept Jeff in Guatemala, what mom and dad said when their boys switched from corporate to nonprofit, and why Jeff running over a chicken is one of Joe’s favorite moments in CoEd history.

Listen podcast-style to the snippet below or scroll down to read the full transcript for part 1. (Scroll down regardless to see some excellent throwback photos.)

Courtney: Can you talk about the first moment you felt inspired to improve education in Guatemala?

Jeff: Well, the inspiration, probably, was a general feeling of seeing the poverty and getting behind the scenes and beyond the tourist things, or the things in the travel books, and seeing people living without the basics. So that made me think: Okay, what can be done to help? I tried a variety of volunteer projects, like a lot of people do: orphanages and stuff like that.

I think the magic moment was getting into a school and trying to teach English as a volunteer and seeing that there weren’t books. Having worked a little bit in the publishing industry, I just felt inspired to help the school get books (in their core subjects, not in the subject I was teaching, necessarily). 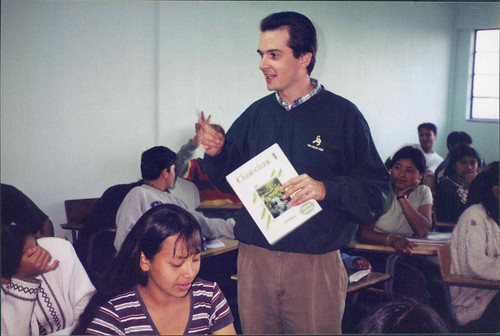 Joe: So Jeff experimented with doing the first book project at La Labor on his own. We were still in contact but he was down in Guatemala for that. And it was an outgrowth of his teaching English there, you know: Hey there’s no books in this classroom! But of course everybody else has them, right? Well, he goes around, and everybody else doesn’t have them. No books in the entire school. Well is it just this school? No, it’s every school. And he had experience in the publishing business; he did the student directory at Xavier when we were there. So he had—

Jeff: You know it was like the phone book, yellow pages—

Jeff: You had to actually go to a publisher and put it together and everything.

Joe: So he had a lot of background in how to sustainably publish stuff. And so, I think at that point in the project you weren’t thinking: Hey I’m gonna have Guatemala in my life for the next 20 years. You know, we were both in our twenties. You were there and it’s like:  Hey, I want to get books in this school, you know? I’ve got some background, I’ve got some knowledge. And then Jeff thought it through and said: Well I’m not gonna be here forever so I have to figure out a way to make it sustainable. So let’s create this self-financing system where we donate the books, they rent ‘em to the kids, the money goes into a fund, and they can replace them as they go. And as he envisioned that and began to roll that out, that was about the time I got involved, at that very first school. And maybe it was even after you put ‘em out there. But I was like: Hey this…this is a good idea! And this is something that a lot of people could get behind. And suddenly my brain starts kicking in, Jeff’s brain starts kicking in, like: Well—what if we did this not just at this one school but let’s offer it to all the schools around here! 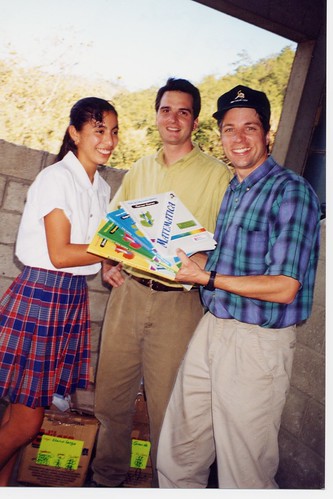 Joe and Jeff at an early textbook school

Jeff: That’s actually—and I think this is something that’s never really been printed in a story—that’s actually where our name came from, ‘cooperative.’ The original idea, it was based on the worker cooperatives in the Basque country of Spain that I had learned about in college: that each region would have schools that would pool together and form a cooperative. Also like a farmers’ co-op, where there’s one farmers’ co-op and you can bring your grain to them, they could sell it in large volume, or you could buy things there. So basically the idea was that every school principal would be a member of the assembly of the cooperative. 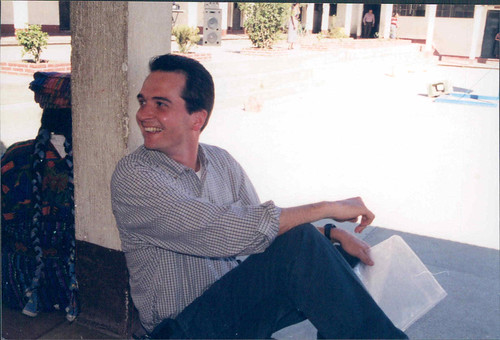 Courtney: So you originally envisioned it as just that region?

Jeff: Yes. Yes, because I had come back—

Joe: Just to the North of Guatemala City. Just that region of communities, and the first ones were San Pedro, El Caritzal, all the ones around La Labor.

Joe: There’s maybe three or four communities right around there. So I was involved at that point when we were ready to expand it to those other communities. Course we didn’t have a nonprofit entity or anything, it was just kinda—

Courtney: Right. But you were writing grants to get the money for the original books, weren’t you?

Jeff: The Society of the Precious Blood gave us a grant for thirteen thousand and change. And that paid for the first set of books.

Jeff: At La Labor. Then I’d actually sort of hired a very part time administrator: one person to see over the books and the system. So my idea was to put that together and then come back. I’d been there about two years, and it felt kind of like a Peace Corp experience to me. My dad was kinda on me, like: When are you gonna get on with your life? and all that kinda stuff. And I was thinking the same thing. And that’s where the famous story comes out that you may have heard, that Joe called me and said: “Hey, you know we should expand this thing.” And I was like, “No, I’m kind of done, ready to go back!” And then within a week or two I met Johanna. And then I called him back. I mean it was one of those really, I wouldn’t say at first sight but pretty close to it, I was like: Wow, I really like this woman. So it was enough to call Joe back and say: Yeah, let’s do it.

Joe: Let’s expand it! (laughing) I wanna be down here a few more years! 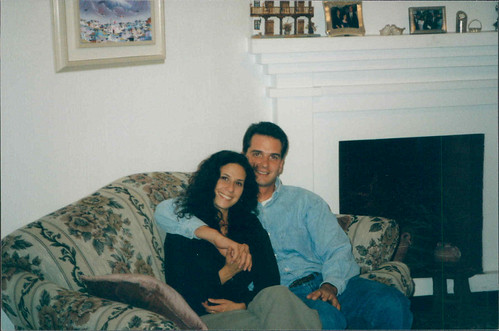